Many different cat breeds are known for being particularly affectionate. While all cats exhibit some level of affection, these breeds are known for being especially loving and cuddly. Some people even refer to them as ‘floppy cats’ because they love to be petted so much. In this article, we will look at some of the most affectionate cat breeds and learn more about what makes them so special!

The Persian has long been considered the king of cat breeds, and for a good reason! These gentle cats are known to have large round eyes, a short nose, small ears set low on their head, shortened legs, and thick fur that is exceptionally soft to the touch. Persians are also generally very calm creatures, making them excellent pets for families with children because they tend to be more tolerant during playtime activities. As far as affection goes, these cats have an incredibly high tolerance for being petted by humans, so people often sit down with them to give them some much-needed love.

Sphynx cats are best known for their nearly completely bald appearance that gives them an alien-like face, but their personality is just as unique. They are incredibly mischievous cats that get into everything and love to do things like open the fridge door in search of food.

While they may not be considered lap cats by nature, Sphynx enjoy spending time with their family members and will curl up next to you on the couch. Many people make the mistake of thinking these affectionate cats hate water because they lack hair, but this is not true. Give them a little bit of catnip every now and again, and they will happily jump into your tub or shower for some water play!

Another cat that seems to be less interested in its looks and more interested in spending time with the people they love is the Exotic Shorthair. While all cats are considered special, these floppy-eared beauties have a particularly endearing personality that makes them excellent pets for families. They are affectionate cats who typically lay down as soon as you get home from a long day at work but will wake up as soon as someone walks by so they can receive some much-needed head scratches! In addition, they have been known to follow families around the house so that they could sit on someone’s lap for a bit because being pet is one of their favorite activities.

These cats are often called the dogs of the cat world because they are so incredibly friendly. People who own this breed of cat frequently say that they would be more likely to sit on someone’s lap than curl up in their own bed at night because they want nothing more than human affection. They are very playful creatures that love water and will even play fetch with you if you have a string! While some people complain that these affectionate cats will eat anything, including flowers, plants, and small household objects, many of their owners just laugh and say, “that’s just one of those things you’ll have to deal with when owning an Oriental Shorthair!”

The Birman is a beautiful cat from Thailand and is known to have a magical color point coat. They are excellent family pets because they love being around people so much but can also be independent when they want to be. If you need to take care of something quickly and quietly, this breed will certainly let you know by walking around your feet or even jumping up on a table! While some cats may knock things over, Birmans get into all kinds of mischief but typically without causing as much damage, which is another reason why their owners love them so much.

For a good reason, the Abyssinian is one of America’s most popular cat breeds today! People who own this breed typically say that their cats would rather spend time with their family than do anything else in the world! These intelligent creatures are very playful and energetic, making them excellent companions for kids who like to play outside. They are known for being loud, but only when they are hungry or want to get your attention. So instead of waking you up in the middle of the night to play with them, these affectionate cats are more likely to follow you around until you finally get tired and give them some quality cuddle time before bed.

Indeed, British Shorthairs are generally more laid back than many other breeds of cats, but they certainly enjoy spending time with the people they love. These affectionate cats will gently paw at your leg until you finally acknowledge their existence and give them what they want, attention! They also use this method to get humans to fill their bowls up with food because you all know how much pets love eating!

While some cat owners may complain that these fur balls sleep most of the day away, others who own British shorthairs typically say that their kitties wake up as soon as anyone sits down on the couch or walks into a room so that they can receive some ear scratches and loving.

All of these breeds are affectionate cats that frequently spend time with their owners and love being around them as much as possible! While all cats have individual personalities, just like people, the breeds listed here have been known to be extremely friendly whenever they want attention from their favorite humans! So if you’re a fan of a purring cat laying down on your lap while you watch TV, then one of these breeds is definitely for you. 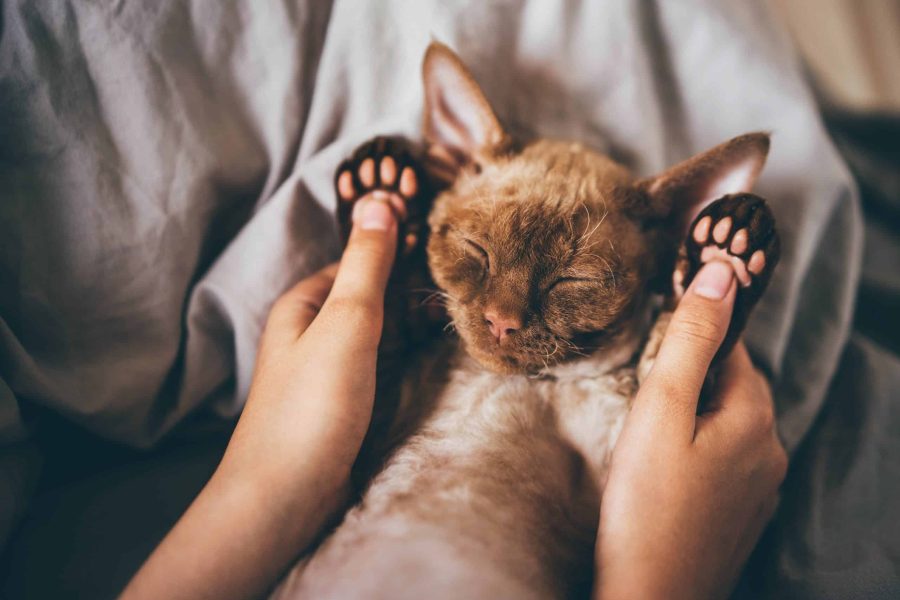 Read More »Tips To Communicate With Your Cat

How To Care For A Vomiting Cat

If your cat is vomiting, it can be a rather obvious sign that something is wrong. Several things could cause your cat to vomit, from…